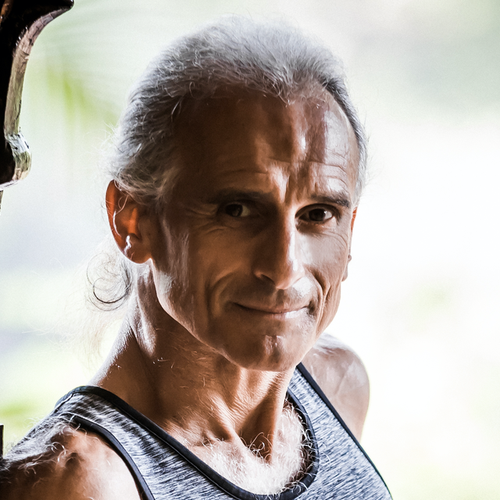 Talks covered by this speaker

Have you got yours yet?

If you want on-going access to these classes, talks and workshops after the festival weekend, be sure to grab your Unlimited pass today!

Simon Borg-Olivier MSc BAppSc (Physiotherapy) APAM c-IAYT is co-director of YogaSynergy, one of Australia’s oldest and most respected yoga schools with a style based on a deep understanding of yoga anatomy, yoga physiology and traditional hatha yoga. Simon has been teaching since 1982. He is a registered physiotherapist, a research scientist and a University lecturer. Simon has been regularly invited to teach at special workshops and conferences interstate and overseas since 1990. Simon was introduced to yoga at age six, learning breath retentions from his father and the main bandhas (internal locks) by Basil Brown (an Olympic athletic). At age 17, Simon studied for one year with a Tibetan Lama who introduced Simon to the philosophy and practice of tantric yoga. In 1980, Simon started the postures and movements of hatha yoga, eventually learning with BKS Iyengar, K. Pattabhi Jois and TKV Desikachar. Simon met his main teacher Natanaga Zhander (Shandor Remete) in 1985 and had the privilege of studying intensively with him for almost two decades. Simon credits Zhander as being the most important person in his pursuit, passion and understanding of hatha yoga. Since 2007, Simon has continued his training with Master Zhen Hua Yang, who has achieved remarkable levels of physical and physiological skill due to the knowledge his family gained from Tibet as well the Shaolin and WuDang temples in China. Simon studied and taught at Sydney University over a period of 20 years. In that time, he completed a Bachelor of Science in human biology, a research-based Master of Science in molecular biology and a Bachelor of Applied Science in Physiotherapy. In 1988, Simon met physiotherapist and yoga teacher Bianca Machliss. Together, over the last 20 years, Simon and Bianca have developed the unique YogaSynergy system. Simon has regularly taught yoga to dance companies (Sydney Dance Company, Sydney Opera Company, Darc Swan, Bangarra Dance Company) and lectured at the University of NSW and the University of Western Sydney Dance Departments. In addition, he has performed with several dance productions and numerous yogic dance performances. Simon regularly gives artistic demonstrations of advanced yoga vinyasa (linked sequences of postures) to music. Simon has co-authored many books and scientific articles. Author and journalist Alix Johnson featured Simon’s personal history and philosophy of yoga in her book ‘Yoga: The Essence of Life: Eight Yogis Share Their Journeys’ (2004). Simon has contributed chapters on yoga to several technical books including ‘An Introduction to Complementary Medicine’ (2005) edited by Terry Robson and ‘Integrative Medicine Perspectives’ (2007) edited by Professor Marc Cohen. He regularly contributes articles to ‘Australian Yoga Life Magazine’, ‘Well Being Magazine’, ‘Australian Natural Health Magazine’, Art of Healing Magazine’ and several Russian Yoga Journals. Simon’s postures have also been featured in many yoga books including Christina Brown’s bestselling book ‘The Yoga Bible’ (2003), Jesse Chapman’s books ‘Yoga Postures for Your Body, Mind and Soul’ (2000) and ‘Yoga for Inner Strength’ (2004) and James Houston’s book ‘One’ (2005). Simon is regularly invited to speak on radio and has had numerous television appearances. He is featured in the recently released film ‘Yoga and Me’ (2009) produced by Robbie Baldwin. He has also been invited to be a guest lecturer/presenter at many conventions and annual conferences, including the Australian Physiotherapy Association (APA) (1997, 1998), Pilates Australia (2004, 2007) Sydney Yoga Expo (2004, 2005, 2006, 2007, 2008), Byron Bay Yoga Festival (2006, 2012), the ‘Yoga and Science’ Conventions (1996, 2005, 2006), the Asia Yoga Conference (Kuala Lumpur, 2007), the 13th International Holistic Health Conference (2007), the FILEX Convention (Australian Fitness Leaders Network) (2007, 2008, 2009, 2010), the International Ayurveda and Yoga Conference (2006, 2009), Happiness and its Causes Conference (2010), Pilates and Yoga Therapy Conference (Athens, 2013), Bali Spirit Festival (2012, 2015, 2016), Russian Rainbow Yoga Conference (Moscow, 2013; Turkey 2014, 2017, 2020), Barcelona Yoga Conference (2015), Namaste Yoga Conference (Jakarta, 2011, 2015, 2016), Berlin Yoga Festival (2015) and MURFEST (Kuala Lumpur, 2015, 2016) and the Groove Yoga Festival (India, 2015, 2016). Since 1995 Simon has been teaching courses in the Applied Anatomy and Physiology of Yoga internationally. Apart from training many teachers in the YogaSynergy System with Bianca Machliss, Simon has also been an invited guest lecturer at many major yoga teacher-training courses throughout the world, including the International Yoga Teachers Association (IYTA) (1990, 1997, 2001, 2002, 2005, 2006, 2016, 2017), ‘Sydney Yoga Centre Teacher Training’ (1995, 1996), ‘Yoga Arts Teacher Training’ (Byron Bay, 2000, 2001), ‘InspyaYoga Teacher Training’ (Byron Bay, 2006, 2007, 2008), the Yoga Teachers Association of Australia (YTAA) (2007, 2008, 2009), ‘Yoga Zone Teacher Training (Kuala Lumpur, 2007), Ysynergy Teacher Training (Kuala Lumpur, 2007, 2008), ‘Vibrant Living Yoga Teacher Training’ (Bali, 2008, 2009, 2010), ‘Yoga Jaya Teacher Training’ (Tokyo and Osaka, 2009), Ihana Yoga (Melbourne, 2016-2020) and NowHere Yoga (Barcelona 2017-2020). Simon has conducted workshops or lectured internationally in Australia, China, Germany, Greece, Finland, Hungary, India, Ireland, Italy, Israel, Japan, Malaysia, Malta, New Zealand, Russia, Qatar, Singapore, Spain, Sweden, Turkey, Thailand, UAE, UK, and USA. In 2007 Simon was approached by Professor Marc Cohen of RMIT University (Melbourne) to create a course called ‘Body, Breath and Movement’. Simon is now the main lecturer and course co-ordinator of this course which he developed and wrote with Bianca Machliss. The course has been running since 2008. The course uses Simon and Bianca's 460-page book (Applied Anatomy and Physiology of Yoga) as its main textbook. This course forms part of the new internationally recognised Master of Wellness degree. In 2010 Simon and Bianca developed and are now teaching a new course for this Degree called ‘Yoga Fundamentals’. This was the first-time Yoga has ever been taught as university degree subject. Simon undertakes regular private yoga and health consultations and travels interstate or overseas to teach at special workshops and conferences between 20 to 30 weekends every year.

Your logo could go here!

If you'd like to get your brand in front of attendees following the categories this speaker is talking about (on this page, via email and during each talk) contact us.
We use cookies This website (and some of its third-party tools) use cookies. These are important as they allow us to deliver an exceptional experience whilst browsing the site. Learn more about our cookie policy. By closing this banner, scrolling, clicking a link or continuing to browse, you agree to the use of cookies. Accept
I need help
No I need help
No I need help